According to the data registered by the Spanish Photovoltaic Union (UNEF), in 2019 Spain installed 459 MW of new photovoltaic power in self-consumption facilities, what meant doubling the installed power in 2018, which was 235 MW. These figures show that more and more citizens, companies, and Public Administration representatives are betting on this technology to reduce their energy expenditure and the carbon footprint of their activity, thus contributing to the fight against climate change. 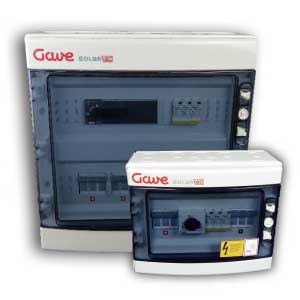 SOLARTEC modular connection box range has been designed for maximum ease of use both by the installer and the user.The range incorporates all security elements indicated by the new standard. The new UNE HD 60364-7-712: 2017 standard applies to photovoltaic (PV) solar power systems and replaces the previous UNE 20460-7-712 standard, which was cancelled the 04-09-2019. Francesc Gutiérrez
Key Account Manager #GaveSolartec
We use our own and third-party cookies to offer our services and collect statistical information. You can accept all cookies, reject them or configure their use. For more information, visit our Cookies policy
+ Techniques and functional
They cannot be disabled
Are those that allow the user to navigate through a website, platform or application and use the different options or services that exist therein.
+ Analytical
Disable / Activate
Are those that allow the person responsible for them to monitor and analyse the behaviour of users of the websites to which they are linked.
+ Advertising
Disable / Activate
These are those that allow the management, in the most efficient way possible, of the advertising spaces that, if applicable, the publisher has included in a web page, application or platform from which it provides the requested service based on criteria such as the content edited or the frequency in which the advertisements are shown.